Pei Yanling, a living legend of xiqu and the Grand Prix of the Plum Blossom Award for Chinese Theatre, is once again bringing the timeless charm of Hebei Bangzi to the Hong Kong stage.

Hebei Bangzi is an influential xiqu genre that originated from northern China during the Qing Dynasty, and was included in the National List of Intangible Cultural Heritage of China in 2006. In February, the Shijiazhuang Hebei Bangzi Opera Troupe visits the Xiqu Centre to present two star-studded performances.

Zhong Kui the Ghost-eater is the most iconic piece in Pei’s repertoire. She serves as the artistic director of this new adaptation of the classic Hebei Bangzi opera, starring her protégé Li Shufen.

In addition, Pei will give a talk where she walks the audience through two iconic xiqu excerpts – Pinggui Bids Farewell and The Drunken Fight – with live demonstrations joined by performers from the Shijiazhuang Hebei Bangzi Opera Troupe, as she explains the artistic importance and distinction of the pieces.

Each performance is approximately 2 hours 30 minutes, with 15 minutes intermission

Each performance is approximately 2 hours 30 minutes, with 15 minutes intermission 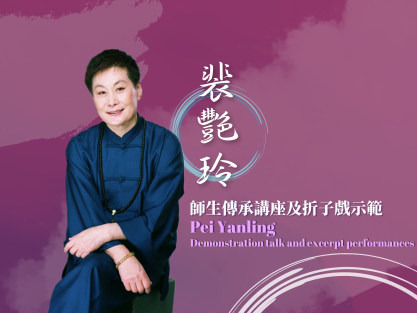