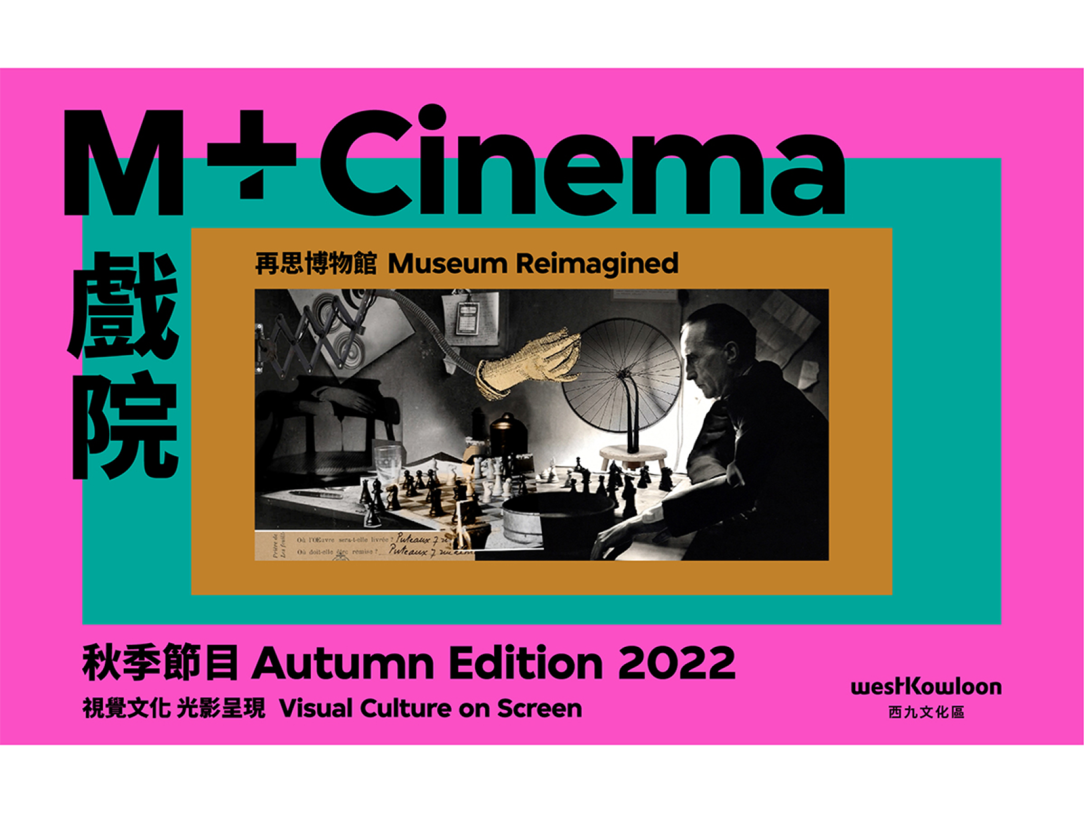 M+, Asia’s first global museum of contemporary visual culture in the West Kowloon Cultural District, announces today the international and multifaceted Autumn 2022 screening programme at M+ Cinema, available to the public from October to December 2022. Tickets will go on public sale on Friday, 9 September 2022. M+ Patrons, Affiliates, and Members can enjoy a priority booking period with discount from Tuesday, 6 September to Thursday, 8 September 2022.

This second edition of M+ Cinema continues its multi-layered curatorial approach with thematic programmes, recent arthouse releases, restored classics, documentaries, and artist films presented in a total of 100 screenings over three months. Celebrating the first anniversary of M+ and complementing the M+ opening exhibition The Dream of the Museum in the Courtyard Galleries, Museum Reimagined spotlights international artists and filmmakers whose work contributes to the appreciation—and critique—of museums as ever-evolving sites of cultural production. Fever Dreams: The Cinema of Claire Denis is M+ Cinema’s first filmmaker profile programme. Co-presented with Alliance Française de Hong Kong as part of the 2022 Hong Kong French Film Festival (HKFFF), the programme dives deep into the groundbreaking career of internationally acclaimed filmmaker Claire Denis. Fever Dreams pays tribute to Denis’s four-decade-long career of depicting the nuances of human relationships as well as the impact of colonialism.

The Makers and Making series explores the creative practices of artists from various disciplines. This edition features stories about a man intent on saving Polaroid photography, Bulgarian-born artist Christo, and fashion designers Martin Margiela and Rei Kawakubo. Also on view are a set of special screenings that pay tribute to key figures in independent cinema from the Philippines and Argentina, and an additional programme showcasing meditations on urban solitude. Finally, M+ explores youth culture on screen with Stair in the Dark, a new Friday evening series at the Grand Stair.

M+ Cinema, together with the museum’s other moving image spaces, including the Grand Stair, M+ Facade, and the Mediatheque, offers audiences exciting and diverse viewing experiences that enrich their encounters with and appreciation of visual culture.

The Autumn 2022 edition offers a rich range of curated programmes:

Suhanya Raffel, Museum Director, M+, underscores the importance of M+ Cinema for the museum, ‘M+ Cinema reflects the museum’s commitment to presenting groundbreaking international visual culture to audiences in Hong Kong and beyond, and we welcome all visitors to enjoy the diverse viewing experience that M+ Cinema has to offer.’

Doryun Chong, Deputy Director, Curatorial and Chief Curator, M+, highlights the curatorial approach of M+ Cinema, ‘We are excited to present Museum Reimagined, a cinematic response to our opening exhibition The Dream of the Museum. Through international artists’ personal readings and creative interpretations, the programme expands on the exhibition’s display and narrative and takes viewers on a critical exploration of the role museums play in contemporary society. M+ curators aim to present our research in various spaces across the building and establish new connections between different artistic disciplines and the creators behind them.’

Silke Schmickl, Lead Curator, Moving Image, M+, shares her excitement about M+ Cinema’s continuous offerings, ‘A highlight of M+ Cinema programme for Autumn 2022 is the presentation of Claire Denis’ pathbreaking oeuvre, organised with the HKFFF. Building on the success of our inaugural edition, we expand the geographical scope for this new edition and add Rediscoveries and Afterimage, two important new recurring series to the programme. With over fifty works from Hong Kong and the rest of the world we welcome film lovers to make M+ Cinema a site for memorable, one-of-a-kind screening experiences and encounters.’

About M+
M+ is a museum dedicated to collecting, exhibiting, and interpreting visual art, design and architecture, moving image, and Hong Kong visual culture of the twentieth and twenty-first centuries. In Hong Kong’s West Kowloon Cultural District, it is one of the largest museums of modern and contemporary visual culture in the world, with a bold ambition to establish ourselves as one of the world’s leading cultural institutions. M+ is a new kind of museum that reflects our unique time and place, a museum that builds on Hong Kong’s historic balance of the local and the international to define a distinctive and innovative voice for Asia’s twenty-first century.