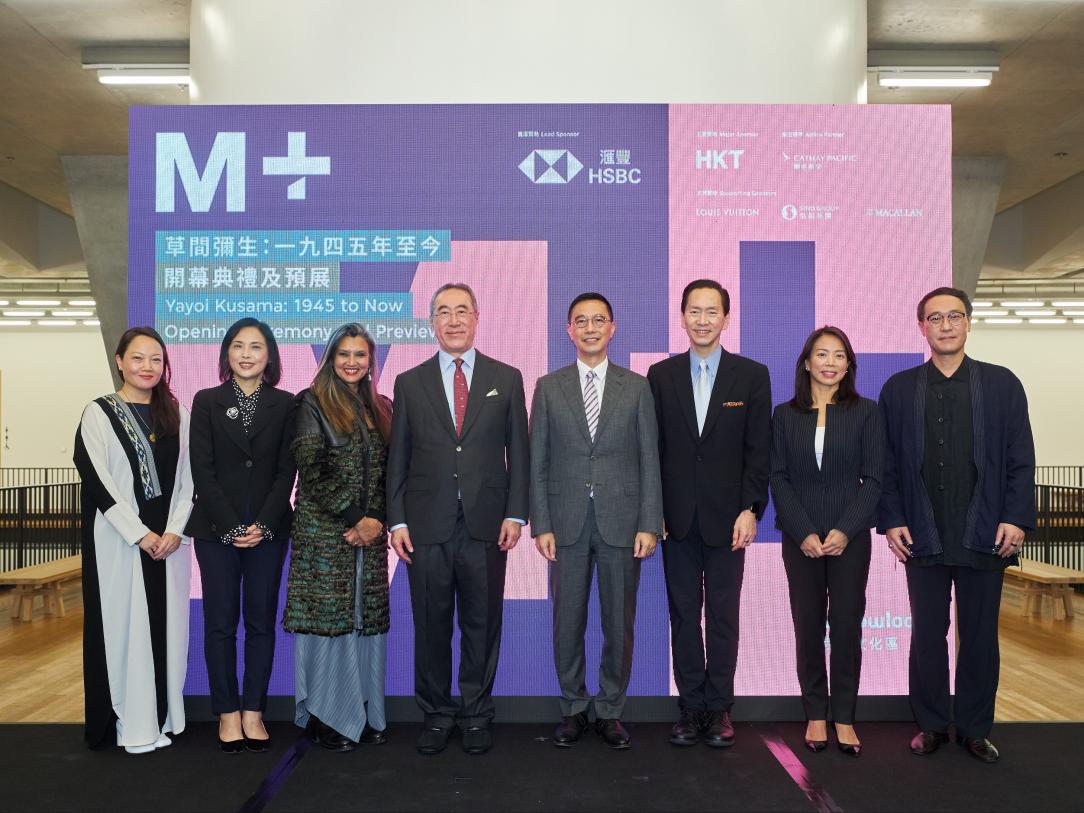 M+, Asia’s first global museum of contemporary visual culture in the West Kowloon Cultural District, hosted an opening ceremony tonight for the museum’s first Special Exhibition, Yayoi Kusama: 1945 to Now, with HSBC as Lead Sponsor, ahead of the exhibition’s public opening. Yayoi Kusama: 1945 to Now will open to the public on M+’s first anniversary on 12 November 2022 and will be on view through 14 May 2023.

Kevin Yeung Yun-hung, Secretary for Culture, Sports and Tourism of the Hong Kong Special Administrative Region, says, ’The West Kowloon Cultural District (the District) is the most important single investment of the HKSAR Government in arts and culture. We will continue to work closely with WKCDA and seize upon the District’s unique strengths to showcase both traditional and contemporary elements and to promote Chinese culture to the world, tell the good stories of Hong Kong.’

Bernard Charnwut Chan, Vice-Chairman of the WKCDA Board and Chairman of the M+ Board, says, ‘M+ has achieved unprecedented success in its first year of opening. The strong show of public support is a testament to the museum’s role in transforming and enriching the cultural ecology in Hong Kong and Asia and making contemporary visual culture more accessible to all. We are proud to present Yayoi Kusama’s exhibition as a gift on our first anniversary to our audiences, as the internationally acclaimed artist’s cross-disciplinary and global art practice resonates with the essence of what M+ offers.’

Luanne Lim, Chief Executive, Hong Kong, HSBC, says, ‘HSBC is proud to be the lead sponsor of this exhibition, which brings the artworks from one of the most inventive and influential contemporary artists to the Hong Kong community. Through this sponsorship, HSBC will offer free visits to children from special schools, disadvantaged youth, NGOs partners, and a range of family-friendly M+ Family Day activities. The timing of this exhibition could not have been better, as Hong Kong continues to return to normal. We share M+’s ambition of making Hong Kong a global cultural powerhouse, just as it is already a global financial powerhouse. HSBC is here behind Hong Kong every step of the way.’

Suhanya Raffel, Museum Director, M+, says, ‘Embodying the mission of M+ to foreground international dialogues in visual culture from the vantage point of Hong Kong, this definitive exhibition is the largest career retrospective in Asia, outside of Japan, of Japanese artist Yayoi Kusama. I am especially proud that the museum’s very first Special Exhibition showcases the work of this internationally celebrated and visionary woman artist. The curatorial team has spent four years to prepare this retrospective which offers groundbreaking new scholarship and an innovative approach to Kusama’s career spanning more than seven decades. The exhibition invites viewers to discover the power of art to connect, transform, and heal.’

Yayoi Kusama: 1945 to Now is the largest retrospective of renowned artist Yayoi Kusama in Asia outside Japan, featuring more than 200 works from major collections from museums and private collections in Asia, Europe, and the United States, the M+ Collection, as well as from the artist’s own collection. The exhibition is co-curated by Doryun Chong, Deputy Director, Curatorial and Chief Curator, M+, and Mika Yoshitake, independent curator. The retrospective highlights the core aesthetic elements of Kusama’s work and foregrounds her recurring philosophical questions about life and death and her longing for interconnectedness. The exhibition explores how Kusama has become a global cultural icon who creates vital and influential work to this day.

Yayoi Kusama says, ‘It gives me great pleasure to present this exhibition as we commemorate the first anniversary of M+. My constant and heartfelt prayer is that the people of this world will forge a path through and beyond the quagmire of war and terror, hatred and sorrow. I seek to benefit society with the foundation stone that is my wholehearted pursuit of truth in art.’

Yayoi Kusama: 1945 to Now is supported by HSBC, Lead Sponsor, together with HKT as Major Sponsor, Louis Vuitton, Sino Group and The Macallan as Supporting Sponsors and Cathay Pacific Airways as Airline Partner of the exhibition.

About M+
M+ is a museum dedicated to collecting, exhibiting, and interpreting visual art, design and architecture, moving image, and Hong Kong visual culture of the twentieth and twenty-first centuries. Located in Hong Kong’s West Kowloon Cultural District, M+ is one of the largest museums of modern and contemporary visual culture in the world, with a bold ambition to establish ourselves as one of the world’s leading cultural institutions. Our aim is to be a new kind of museum that reflects our unique time and place, a museum that builds on Hong Kong’s historic balance of the local and the international to define a distinctive and innovative voice for Asia’s twenty-first century.