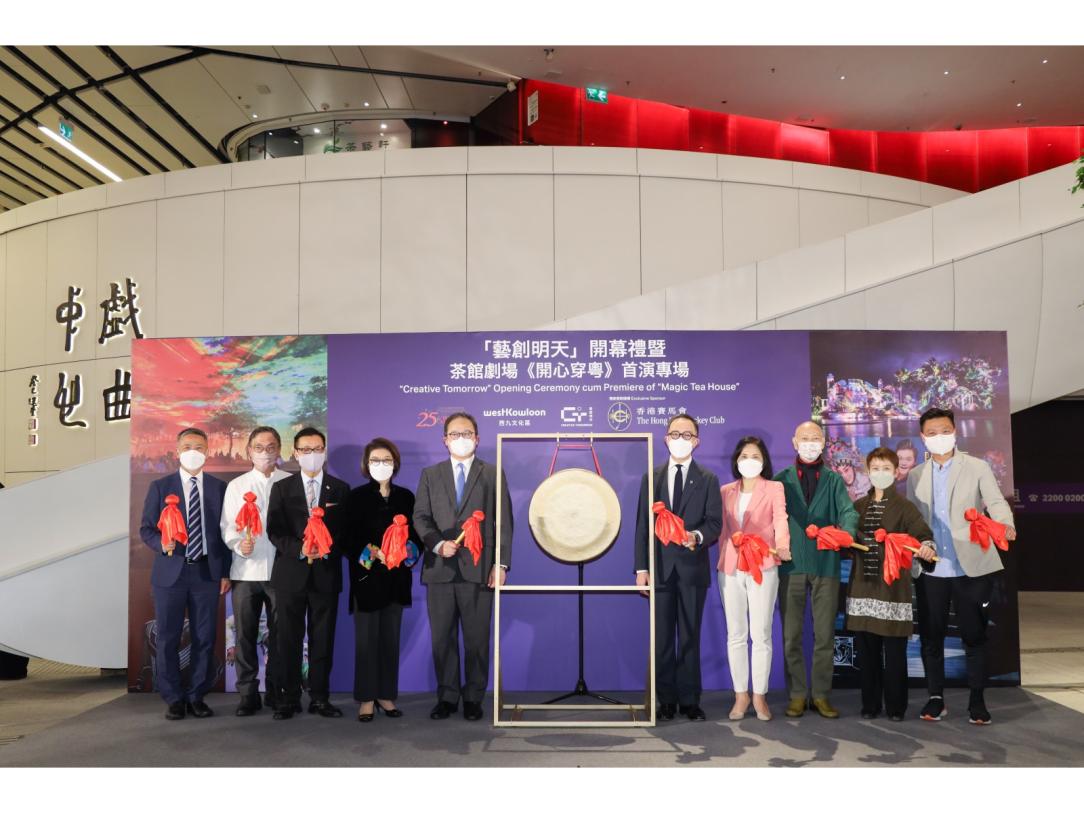 Guests attended the opening ceremony of “Creative Tomorrow” at the Xiqu Centre this evening.

The West Kowloon Cultural District (the District) is pleased to announce the launch of “Creative Tomorrow”, a first-of-its-kind arts tech festival exclusively sponsored by The Hong Kong Jockey Club (HKJC). A key highlight of the District’s Performing Arts Season 2022-2023, “Creative Tomorrow” features more than 500 performances and events that blend technology and innovative programming in a display of creativity and encompass xiqu, theatre, music, dance, indoor and outdoor installations. Not only does the festival fully echo the Government’s vision to support arts tech development in Hong Kong, it also reinforces the District’s positioning as an innovative arts and culture hub that provides new and exciting experience to both artists and audiences alike.

Joe Wong Chi-cho, Permanent Secretary for Culture, Sports and Tourism, said: “On this auspicious occasion when we celebrate the 25th Anniversary of the establishment of the Hong Kong Special Administrative Region, I am very happy to witness the launch of a major, first of its kind arts-tech festival, “Creative Tomorrow”, that spans several months in the District. The festival embodies a series of xiqu, theatre, music, dance, outdoors and indoors installations where technology meets transformative programming in a display of creativity. In particular, Magic Tea House is the first performance in Hong Kong featuring robotics and AI technology. Not only does it demonstrate every possibility brought by the hybrid of innovation and technology and performing arts, it also deliver brand new experiences to our audience.”

Dr Gabriel Leung, Executive Director, Charities and Community, The Hong Kong Jockey Club, said the HKJC was delighted to support “Creative Tomorrow” to further the development of Hong Kong’s arts and culture as well as its creative industries. “The possibilities of technology today are immense. Digital and AI technologies can open new and thought-provoking perspectives for audiences, providing new ways to enjoy and appreciate the performing arts,” he said.

Winnie Tam Wan-chi, Chairman of Performing Arts Committee of WKCDA, said, “We are grateful for the continuous support of the Government and the HKJC to the West Kowloon Cultural District in furthering arts and cultural development. In just 10 months, the District has welcomed the opening of M+ and the Hong Kong Palace Museum (HKPM) as well as the launch of ‘Creative Tomorrow’, the first-of-its-kind arts tech festival in the District’s performing arts venues. Featuring up-and-coming artists and art groups from Hong Kong, Mainland China and overseas, our creatively curated programmes are taking bold strides in exploring the endless possibilities of integrating arts and technology across spectrums, testifying to WKCDA’s vision to elevate the city’s status as an East-meets-West centre for international cultural exchange.”

Exclusively sponsored by The Hong Kong Jockey Club, “Creative Tomorrow” is one of the many initiatives supported by the HKJC’s approved donation of HK$630 million to the Government to mark the 25th anniversary of the establishment of the Hong Kong Special Administrative Region. One of the key highlights, Magic Tea House, presented at the Xiqu Centre’s Tea House Theatre, will be staged regularly throughout the whole performing arts season from 13 August 2022. It is Hong Kong’s first-ever Cantonese opera production to feature robotics and AI technology, with a humanoid robot emulating the facial expressions, voice and body gestures of renowned Cantonese Opera artist Law Ka-ying. The production will combine a live performance with recordings, three-dimensional soundscapes and state-of-the-art technologies to fully immerse the audience in a magical tale that puts Cantonese opera in a new light.

Digital Odyssey, the innovative featured programme of “Creative Tomorrow”, will take place both indoors and outdoors around the District in February and March 2023. Highlights include a series of experimental installations, games and workshops curated by local media art curator and researcher Kyle Chung. Exciting programmes of Digital Odyssey include Borealis by Swiss artist Dan Acher who will bring the first-ever vibrant recreation of the Northern Lights to Hong Kong; petrichor, a constantly changing, dream-like world of projections, soundscapes, and artificial mist by German artist Robert Seidel; and Distributive intelligence | A group mind, an immersive, kinetic light installation by Swiss artist Lukas Truniger. In addition, Hong Kong media artist Chilai Howard will present The Orchestra of Temple Street – a creative visualisation of crowd-sourced streetscape data exploring and reinventing the inherent impression of Temple Street while local artist Enoch Cheng will curate Views from the Grand View Garden (working title), taking elements from Xiqu’s stylised body and costumes to reinterpret classical characters and exploring the complexity of human’s psychology with modern science and language.

Phygital D – an innovative series of programmes under “Creative Tomorrow” that blends dance, live physical performance, film, motion capture and virtual reality experiences – will be staged at Freespace in September and October. Featuring multimedia and movement artists from Hong Kong and Asia, Phygital D features six new creations that transport the audience through a variety of physical and virtual dance worlds. Avant-garde Japanese artist Hiroaki Umeda will present the full-length performance of indivisible substance – the final iteration of the work-in-progress virtual experience presented by Freespace in 2020 and 2021, along with three related installation works by this leading multidisciplinary artist. Emerging Chinese new media artist Lu Yang will premiere a real-time collaboration in a hyper-real shared virtual environment between dancers and virtual avatars in Freespace in West Kowloon and Sydney Opera House. Other creations by local artists include a multisensory interactive dance adventure by Zelia ZZ Tan, an individual imaginary dance experience by Chan Wai-lok and an immersive VR installation by Tsang Tsui-shan, the Best New Director of the 31st Hong Kong Film Awards.

The highly anticipated Freespace Jazz Fest returns for its fourth edition at the end of October on a scale larger than before and will, for the first time, expand to Wonderland, an event space adjacent to the HKPM in the District. Featured artists include Eugene Pao, Joyce Cheung, Daniel Chu and the Patrick Lui Jazz Orchestra. In The Room at Freespace, the Experimental Lab will offer an avant-garde musical experience with local musicians and new media artists improvising live online with artists from around the world, adding excitement to the five days of non-stop great music and cultural activities. In November 2022 and March 2023, the Future of Performance series will blend light and soundscapes to examine the subconscious and explore the performance potential of telepresence techniques through game control programming and first-person game play.

Tickets for the “Creative Tomorrow” programme will open for sale in phases. For the latest programming information and ticketing arrangements, visit https://www.westkowloon.hk/en/creativetomorrow.

About The Hong Kong Jockey Club
Founded in 1884, The Hong Kong Jockey Club is a world-class racing club that acts continuously for the betterment of our society. The Club has a unique integrated business model, comprising racing and racecourse entertainment, a membership club, responsible sports wagering and lottery, and charities and community contribution. Through this model, the Club generates economic and social value for the community and supports the Government in combatting illegal gambling. In 2020/21, the Club returned a total of HK$29.4 billion to the community. This included HK$24.9 billion to the Government in duty, profits tax and Lotteries Fund contributions and HK$4.5 billion in approved charity donations. The Club is Hong Kong’s largest single taxpayer and one of the city’s major employers. Its Charities Trust is also one of the world’s top ten charity donors. The Club is always “riding high together for a better future” with the people of Hong Kong. For details, please browse www.hkjc.com