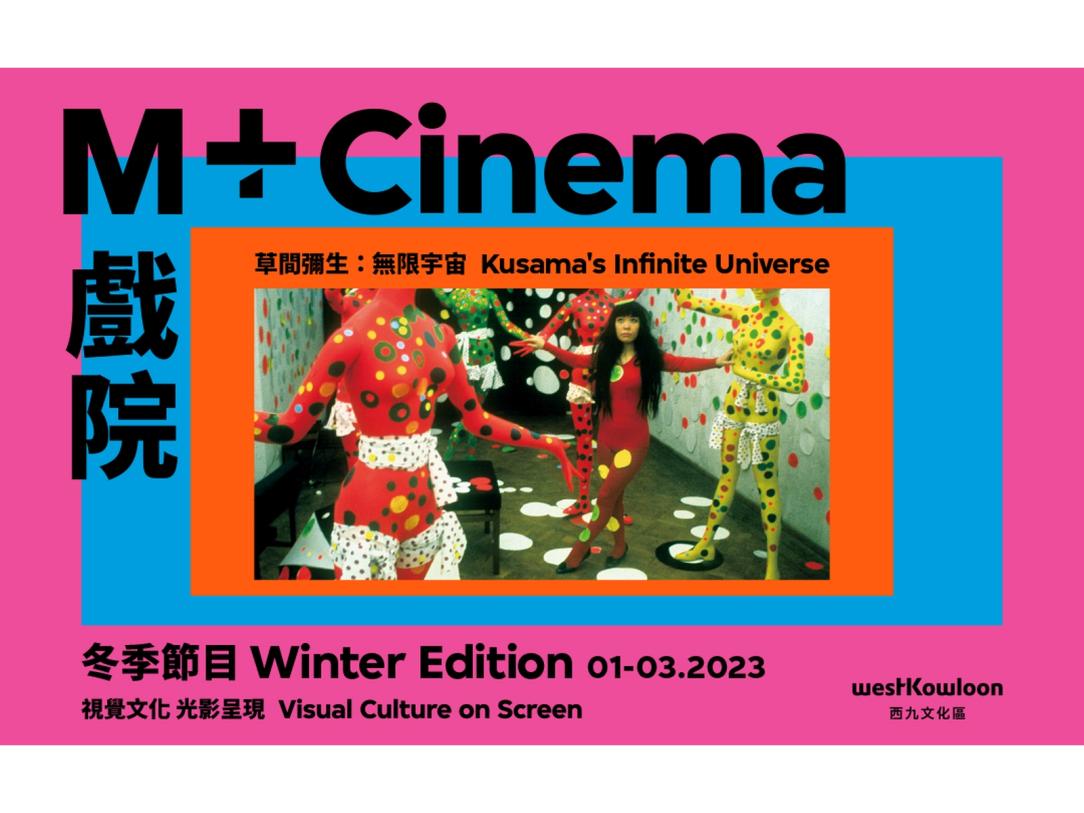 Kusama's Infinite Universe deepens the connection with M+’s first Special Exhibition Yayoi Kusama: 1945 to Now;
Techno Sapiens explores how technology is pushing the limits of our humanity; and
Anatomy of a Classic: Infernal Affairs invites audiences to revisit the modern classic of twenty-first-century Hong Kong cinema in 4K, after its twentieth anniversary

M+, Asia’s first global museum of contemporary visual culture in the West Kowloon Cultural District in Hong Kong, unveils the M+ Cinema Winter Edition which will be presented from January to March 2023. Tickets will go on sale starting from Monday, 12 December 2022. M+ Patrons, Affiliates and Members can enjoy a Members’ Priority Booking period with 20% discount from Friday, 9 December to Sunday, 11 December 2022.

M+ Cinema strives for diverse viewing experiences that enrich audiences’ encounters with and appreciation for visual culture. Programme highlights include Kusama’s Infinite Universe, a thematic programme in dialogue with M+’s first Special Exhibition, Yayoi Kusama: 1945 to Now, which celebrates the inspiring vision of this singular visionary artist and others in Kusama’s greater creative community. Techno Sapiens asks the pertinent question of whether technology fosters distance from others, helps surmount it, or both. It also enquires into the different sorts of relationships offered by human beings and machines. Anatomy of a Classic: Infernal Affairs will invite audiences to revisit the modern classic of twenty-first-century Hong Kong cinema in 4K, after its twentieth anniversary. Moreover, the Infernal Affairs Trilogy Marathon will project the original 35mm film prints and will be followed by a post-screening discussion on the restoration, conception, and production of the trilogy.

Details of the programmes are as follows:

M+ Grand Stair—Stair in the Dark

Once a month on a Friday evening, Stair in the Dark offers a cinematic and relaxed atmosphere at the Grand Stair during the museum’s extended opening hours. Continuing the inaugural series Beautiful Losers, which explores youth cultures through the lens of cinema, this edition features Hou Hsiao-hsien’s Dust in the Wind (1986), an elegiac film about adolescence which draws from screenwriter Wu Nien-jen’s upbringing in rural Taiwan and his aching memories of first love. The series will also present Touki Bouki (1973), a conceptually daring film by Senegalese filmmaker Djibril Diop Mambéty, which follows two lovers hoping to leave Senegal for the prospects of living in Europe. Considered a masterpiece of African cinema, Mambéty’s feature-length debut was restored by the World Cinema Project, an organisation founded by Martin Scorsese. The two films will be shown once respectively in January and February 2023.

About M+
M+ is a museum dedicated to collecting, exhibiting, and interpreting visual art, design and architecture, moving image, and Hong Kong visual culture of the twentieth and twenty-first centuries. In Hong Kong’s West Kowloon Cultural District, it is one of the largest museums of modern and contemporary visual culture in the world, with a bold ambition to establish ourselves as one of the world’s leading cultural institutions. M+ is a new kind of museum that reflects our unique time and place, a museum that builds on Hong Kong’s historic balance of the local and the international to define a distinctive and innovative voice for Asia’s twenty-first century.